Through a series of improbable circumstances, I got my hands on a Honda CRF450L for a few weeks this summer.

Actually, that’s not true; Honda was more than happy to volunteer the bike to me, when I mentioned I was curious about it. That surprised me, as I’m always quite open about my lack of offroad prowess; I love riding in the dirt, but if I was a superhero who rode a dirtbike, I’d probably be called Captain Cautious. But hey, they offered the machine up, and I certainly wouldn’t turn that down! I threw the bike in my truck, drove home, and the next day, headed out to see What Kind Of Motorcycle This Really Was. And who’d want to buy it? And why? 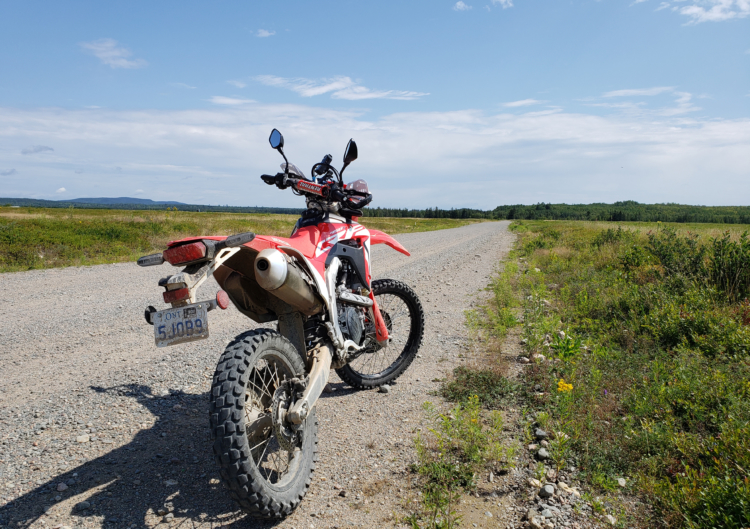 I managed to lose the heat shield off the exhaust. Photo: Zac Kurylyk

First up came two long days of scouting for the Fundy Adventure Rally. I’m talking 400-km days—easy on a comfortable GS, not so easy on a single-cylinder dirtbike with a sawhorse seat.

That’s how I felt about the bike the first few hours I rode it. My WR250R had felt a bit uncomfortable when I bought it earlier this year, but it had nothing on the 450L’s saddle,. At first, it feels like it was designed by the Spanish Inquisition. At least, that’s what I’d expect, as it felt like torture the first few hours. I can hear you now: “Then stand up on the pegs, you dummy!” Alas, the pegs-handlebar-seat ergos never really suited me (not Honda’s fault, I blame my awkwardly short legs and long torse). Besides, I had to traverse a lot of paved back roads, and there’s no reason to stand there anyway.

The CRF didn’t feel like much fun on those paved stretches at first, but when I got to the wide-open gravel roads I was scouting for the Fundy Rally, it got a lot better. 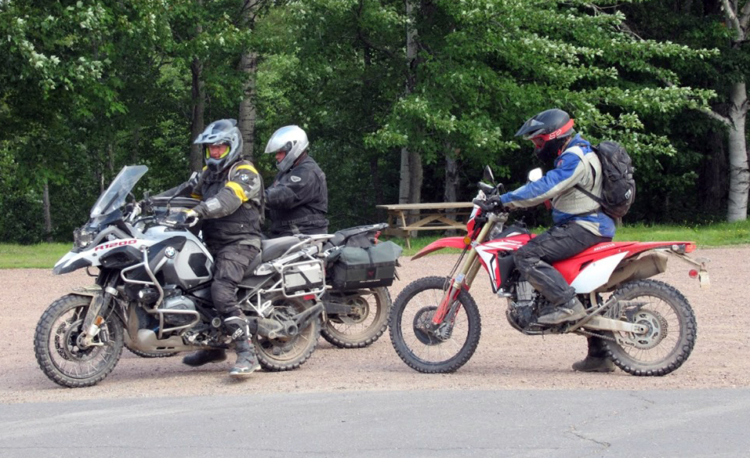 The CRF450L was much better than the GS and Africa Twin in the gravel, but they left it behind very quickly on the street! Photo: Charles Landry

I’ve had a chance to ride a wide variety of Japanese dual sports, both old and new, and none of them has ever approached the offroad capability of the CRF450L. Japanese duallies have traditionally had a lot of compromise engineered in, to make them comfortable for street riding; this is what sets them apart from European enduros with blinkers. The Euro bikes will stomp all over the best Japanese on/off models when it comes to dirt riding, but will leave you with cramps from discomfort and vibration when you hit the street. Their suspension is aimed at off-road capability, and their power delivery is pure dirt bike: savage, torquey delivery.

The CRF450L comes much closer to that formula than any other dual sport from Japan. Its engine doesn’t have the edge of a true dirt bike, but it’s not far behind. A competent woods rider might prefer the suspension of a real enduro machine, but the CRF450L should work almost as well. A pure offroad bike will weigh less, but the CRF450L is light enough that you can really whip it around in the dirt. At the end of a couple days of riding this thing on gravel roads, I was in love with its offroad capability. Later, by the end of the actual Fundy rally, I noted the CRF had no trouble at all pulling away from big-dollar adventure bikes on gravel roads (although they quickly left it behind on the street).

But what about real dirt bike riding: single track, gravel pits, and so on? After all, you can ride a Gold Wing down a fire road, as long as you take it slow. 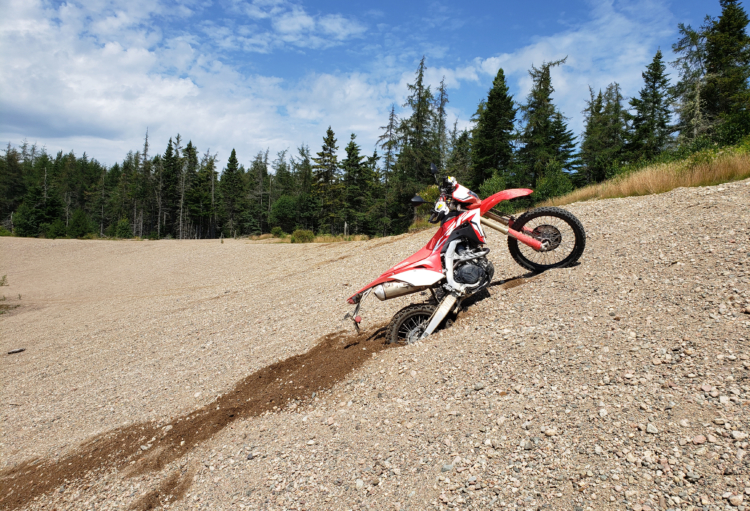 The CRF450L gives you an urge to hoon around in gravel pits and generally have fun off-road. Photo: Zac Kurylyk

Because of time constraints, I just wasn’t able to do as much of this sort of riding as I would have liked. However, when I did end up in those scenarios, either by mishap (I went down a seriously nasty gravel drain when I mis-read my GPS), or on purpose, the CRF performed admirably.

Don’t get me wrong, it’s not a 250 2T, and it doesn’t handle like one. It’s heavy compared to a real woods bike, and first gear’s power delivery is too savage to be enjoyable in the tight stuff (a complaint I’ve also seen coming from CRF450L owners). But if you’ve got a careful clutch hand and the right tires, you should be able to power through just about any terrain.

But where the 450L is really fun is areas like a beach, or a sandpit, where there’s all sorts of room to open it up, and the terrain tries to suck horsepower from your rear wheel. I found myself looking for opportunities to branch off fire roads and ATV trails into gravel pits, just to see what the bike could do, and what I could do. Because, when you’ve got a bike this competent, it starts to open your eyes as a rider, letting you explore your own limits. 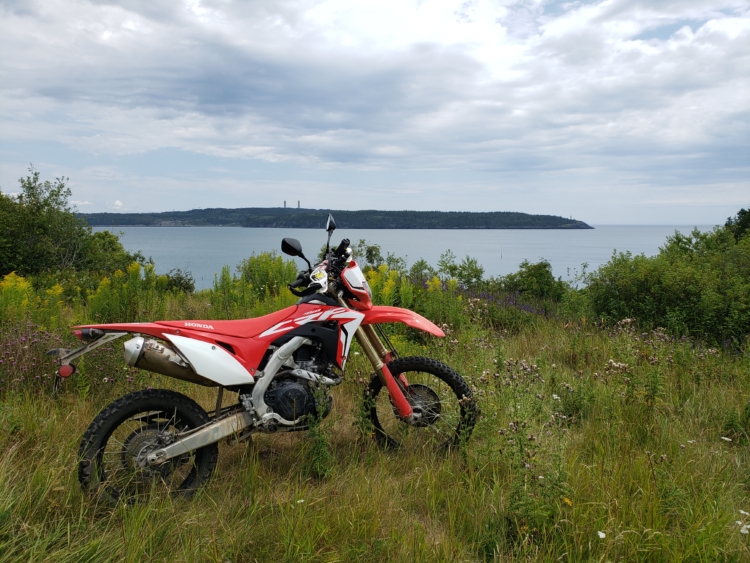 Because of its compact size, the CRF450L is fun to take down rarely-explored side trails, just to see what’s at the end. You might not do that on a big-bore ADV bike, or even on a porky KLR. Photo: Zac Kurylyk

The test wrapped up with a few days of rides on Prince Edward Island, down easy clay roads and secondary highways with a 90 km/h speed limit. By now, I’d broken the seat in, or it had broken me in. I didn’t mind it at all, and I found I actually enjoyed the CRF450L as a street bike. I didn’t like riding it in a straight line at a sustained speed, but on a relatively curvy back road, where you could use the aggressive power curve more appropriately, it actually proved to be tons of fun. Remember, it’s a lightweight bike. Curb weight is a claimed 289 lb, and output is around 45 hp for the North American model (Honda won’t release an official number). In other words, this carries on a long tradition of big-bore Honda thumpers, all the way back to the old 600 series, which were always known to be a fun machine for the street due to their power-to-weight ratio, and ability to soak up the bumps on a bad road.

The price tag ($10,399 USD/$11,899 CAD) means this machine is an expensive toy, but that MSRP is around the European competition. If local Honda showrooms are any indication, there’s plenty of opportunity to pick one up at a discounted end-of-season price. To me, that’s still a lot of money, but for riders who don’t mind putting a new machine on payments, it’s doable. 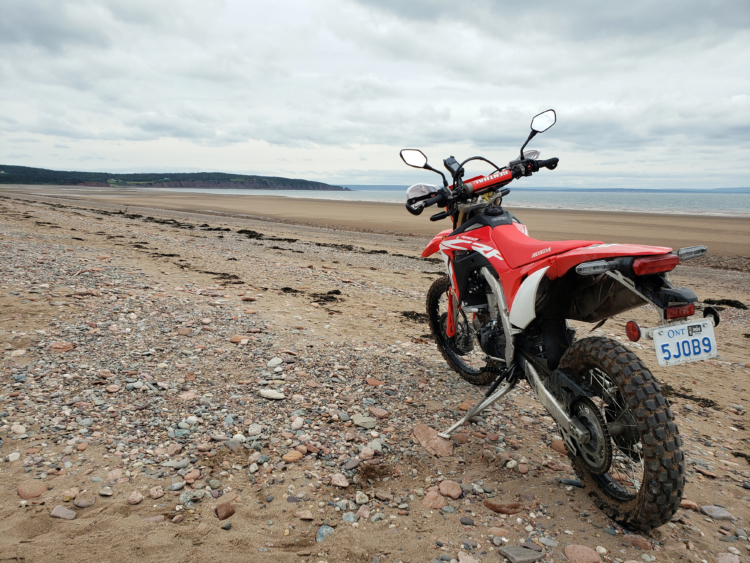 Although it handles the tight stuff better than a 650-class duallie, the CRF450L really leaves them behind when you get to wide-open, grip-it-and-rip-it terrain. Photo: Zac Kurylyk

Overall, I was quite happy with the bike over the long run (I had it for almost a four-week test, and put about 2,200 km on it). However, I think Honda could have made this bike much more street-friendly with only minor adjustments (better seat, taller sixth gear). And, would it have killed them to include a real metal skidplate? I realize most modern dirtbikes don’t come with one, but I would probably buy one shortly after buying the bike.

Other components, like the signals, were pretty decent, and the headlight is the best I’ve ever used on a dual sport. It’s surprising, considering this is basically an enduro, but it will no doubt keep desert racers and the like happy. As for the tires, I burned off a set quickly, but they saw a decent amount of pavement, so it’s not really their fault. I did note a lot of owners seem to be swapping over to Dunlop D606 rubber after owning the bike a while.

As for the oil change controversy: Honda caused a flap when it announced this bike would have 1,000-km oil change intervals. Yeah, that sounds bad, but if you’re a DIY type of person, you’re probably going to get them done quickly and cheaply, and nobody’s buying this bike to tour on anyway. Realistically, the 1,000-km oil changes mean most riders will change the oil 5-6 times a year, and many offroaders are used to that sort of schedule anyway. 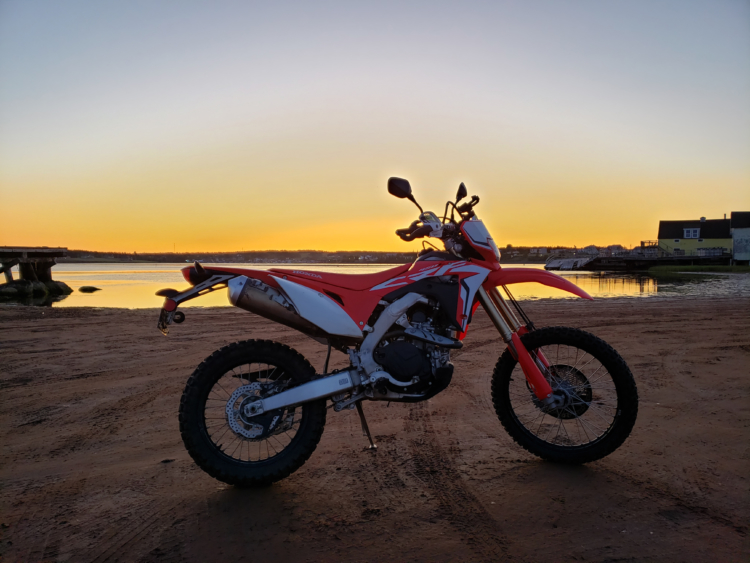 Such a fun bike! But the price tag is very hard to swallow. Photo: Zac Kurylyk

Much as I loved the Honda, it wasn’t for me, at least not as my only bike. It’s too dirt-focused to be a fun touring machine, it’s too expensive for me to justify, and the maintenance schedule would be frustrating if I just wanted to ride.

But if I had the money, and I was looking for a dirt-oriented second bike (or in my case, sixth or seventh bike)? Yeah, it’d be easy to see this making sense. Especially if I wasn’t putting many miles on over a summer. To me, that’s the ideal customer for this bike: a buyer with a good job, and a hankering for a street-legal, but reliable, dirt bike that can be used for blasting through wider trails and relatively open space. I wouldn’t buy one for single-track use, but in the desert, or the prairies, or more spacious gravel/dirt tracks in the east, this machine is a grin-inducing monster that just might make you fall in love with off-roading all over again.

ADV as a Night Owl