The MotoGP series does not publish attendance figures for individual races so it’s hard to know how many people came to watch the MotoE racing.

According to Motorsport Magazine, the MotoGP paddock opinion of MotoE is split three ways.  Some people hate it, others love it and the remaining people really don’t care about it.

The first two groups, hate it and love it, seem to be separated by a generational gap.  People who have been around the paddock for many years generally hate it while those younger people who grew up with electronics and energy drinks love it. 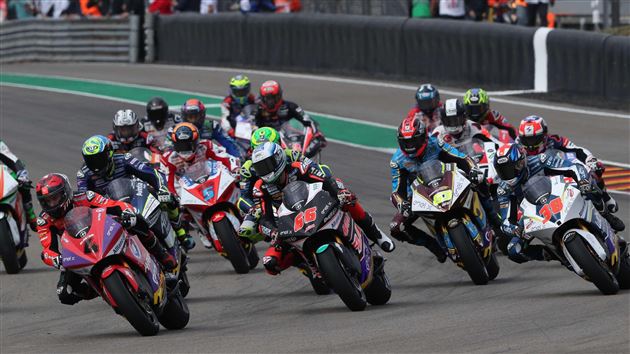 MotoE racers at the first MotoE round at the Sachsenring. Photo credit: Roadracing World

For example, Carlo Pernat one of MotoGP’s old guard hates it.

“They may be the future, but they’re not my future.”

But asking Mugen Isle of Man TT winner Michael Rutter what he thinks about MotoE resulted in him saying, “It’s going to happen whether you like it or not, so you may as well embrace it.”

So if MotoE is here to stay, what could some of the issues be?  Cleary the loss of the sound and thunder of internal combustion engines is one but what else?

So with the handicaps of almost no ICE sensory excitement, no major motorcycle manufacturers developing electric motorcycles, and a single make, low funding racing series, the question becomes, can the series survive.  Right now the series is a bit of an oddity, but once the “newness” wears off, will people come to see MotoE racing and will it last long enough for the major motorcycle manufacturers to join the party?