I was in the North Island of New Zealand on a Harley Road King, looking for photo ops. Having found one I chucked a u-ey (performed a U-turn) and parked on the right-hand side of the road before getting my photo. When I started back up, I just rode off. On the wrong side of the road. Next thing I found myself looking at the letters ODE very close up. They were on the radiator of the Foden truck coming towards me – on his side of the road, of course. Which was also the side of the road I was using. I had no chance of making it back to the left lane, so I wrenched the bars over and dropped into the ditch on my right. I bet that driver is still dining out on the story of the Harley that came towards him and then disappeared.

When you ride on different sides of the road a lot, you lose the sense of where you’re supposed to be. This is a common cause of crashes, but here’s the good news: if you are just getting used to riding on the ‘wrong’ side of the road, this is unlikely to happen to you because you’re especially aware of the difference.

What am I leading up to? 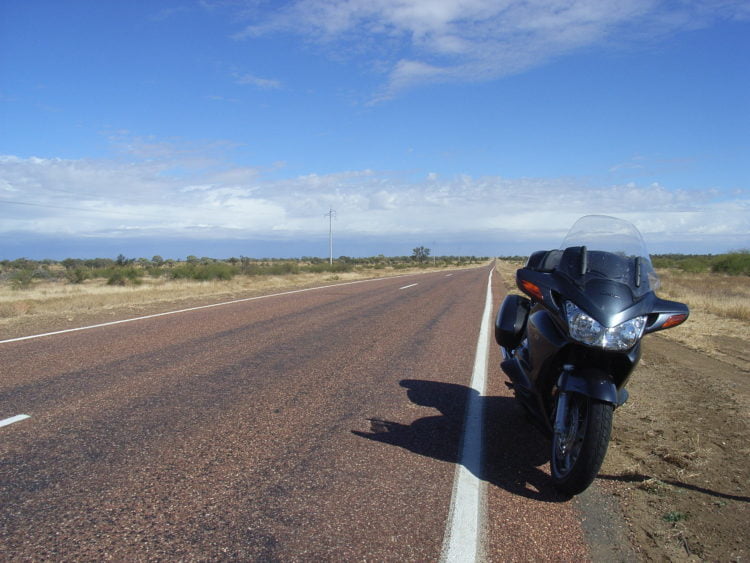 Australia is the oldest continent. You can see that on the country roads.

When the coronavirus and the lockdowns get you, well, down there is one thing you can always do: plan your next trip. Since up your way things are unlikely to settle down before next (northern) winter, let me try to seduce you with thoughts of the southern hemisphere. You will not need to invest in any new or different riding gear. Even your helmet will be okay, since we allow helmets that meet pretty much any of the main international standards. You will find that the motorcycles available in the US will be for rent here. The only major adjustment you will need is to learn to ride on the left-hand side of the road. See above.

It is hard to know what will happen to airfares, but I suspect that they will stay low to build capacity back. You may even find that it is cost-effective to fly your bike over, especially if you’re going to stay for a while. There is plenty to see and do, I promise you, and I’ve put together some of the less well-known destinations below.

So drag a few bucks out of that underperforming bank account and consider how you might spend it in Australia or New Zealand. In both countries your dollar will be worth more than at home. There really is no reason to hang back if you’d like to get some unfamiliar road under your wheels. And if you don’t want to do that – why don’t you want to? 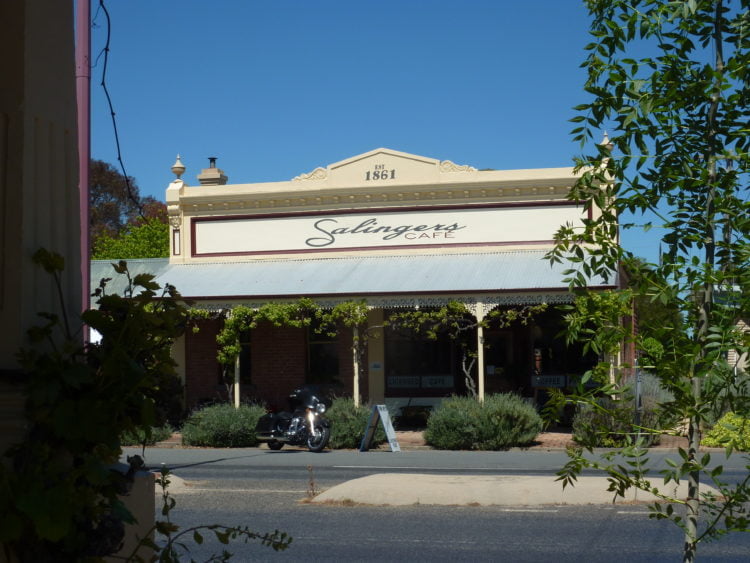 Winery regions are just as charming as California’s, and a lot cheaper.

Here are a few suggestions based around trips I’ve done in the past few years. If you’re not into Men at Work, you might like to remember John Greenleaf Whittier’s words: “For of all sad words of tongue or pen, The saddest are these: “It might have been!”

Australia is a big country, right? But have you ever seen how big it is? Roughly the size of the lower 48. How about combining a Captain Cook (look) at that countryside with a bit of a squiz (look) at some of its history? Take a run out to Longreach from Mackay along the Capricorn Highway. It’s less than 1400km (call it 800 miles) there and back, but it will give you an idea of what the “sunlit plains extended” (poetry reference) look and feel like. Along the way you can check out the birthplace of the Australian Labor Party (kind of the Democrats) under the Tree of Knowledge at Barcaldine and the wonderful Stockman’s Hall of Fame and Qantas (world’s second-oldest airline) Museum in Longreach. They have a genuine Boeing 747 parked out there, where the airline began. 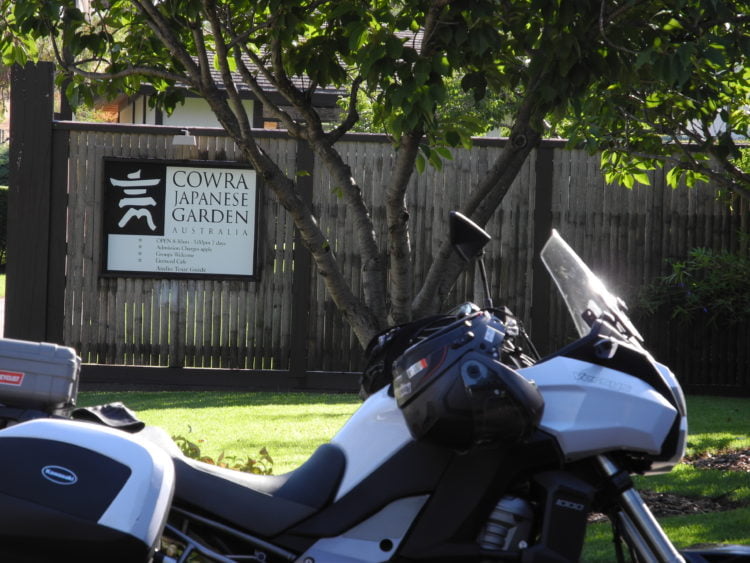 But most of all you can just get an idea of what Australia, away from the crowded coast, is really like. It’s a buzz.

Great Western in Victoria is another eye-opener. Unlike Longreach, this is a temperate little spot which owes its existence to the underground drives that unemployed miners dug for Australia’s bubbly (unauthorized champagne) business. The nearby Grampian hills provide exciting riding.

New Zealand’s history is somewhat different from Australia’s, partly because the indigenous people bought guns when they found themselves confronted by the British colonists, and shot back when they were attacked. In the end, it didn’t do them all that much good, but at least they came out of the conflicts with a treaty, unlike Australia’s indigenous people who are still waiting. 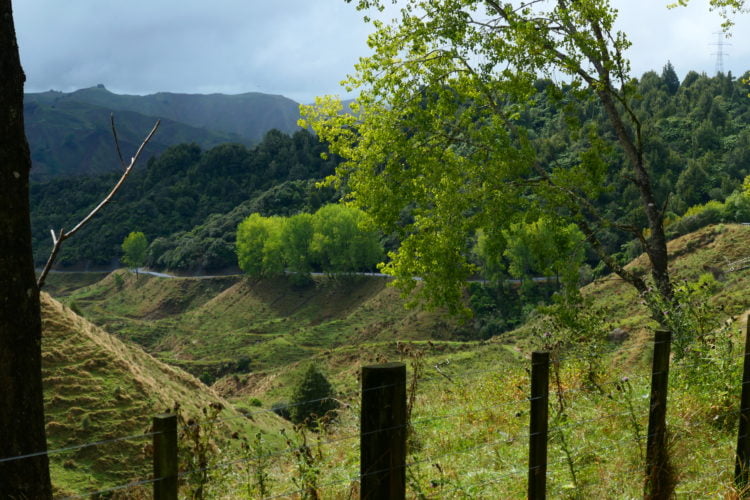 NZ offers spectacular riding both on- and off-road.

The focus in New Zealand tends to be on the South Island. That’s probably justified, but it misses so much history and scenic beauty as well as wonderful motorcycle roads.

Both SH3 from Hamilton to New Plymouth and SH5 from Taupo to Napier would be idolised by motorcyclists if they were in any other country. The roads around the central spine of volcanoes form a network that will repay a few days’ riding, and there are always hot springs and spectacular watercourses to visit. 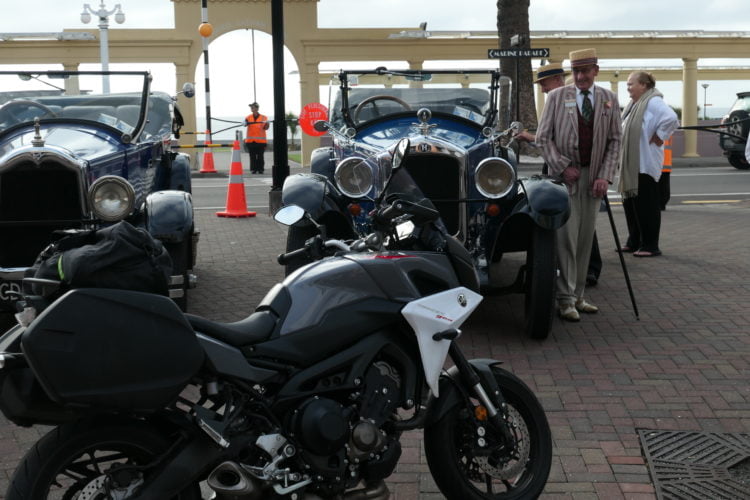 Kiwis are great collectors, and that includes vintage cars and motorcycles.

North of Auckland is a very different land, mostly gentle and agricultural but no less attractive for riders. Historic villages like the historic Puhoi with its charming pub, and sun-swept beaches all the way up to North Cape make for rewarding riding. 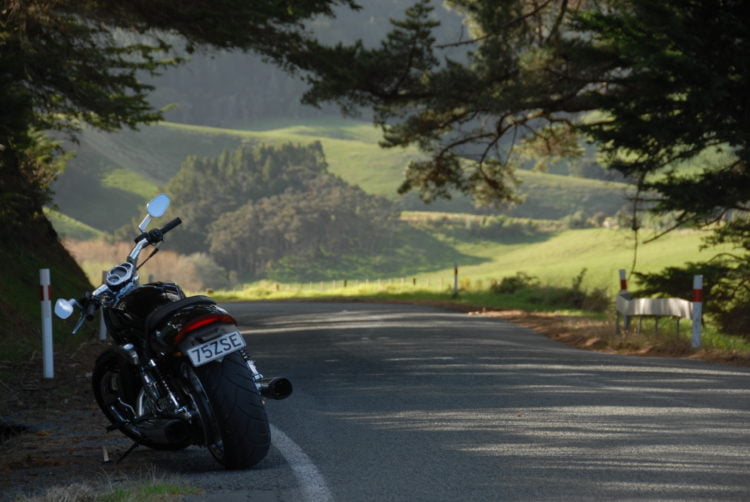 Just poking around on the small roads north of Auckland can be highly rewarding.

The Coromandel Peninsula is becoming popular with holidaymakers, but it’s still a bile like equivalent places in the US were 25 or even 50 years ago. Stop in at Waikikamukau, which is pronounced Whykickamoocow.  Did you know that, according to writer Mark Lawson, Timaru in the South Island is the world’s most boring town? Never let it be said that NZ holds no fascination for the traveller.

Well, I’ve run out of space, and will have to tell you more about New Zealand at another time.  but do consider visiting Down Under. Just remember that the right side is the wrong side.