Someone asked me recently whether I have ever had any really, really bad moments – the worst ADV moments – during my seven years of motorcycling and adventure travels. The “I want to go home/quit/teleport self someplace warm and dry/never get on a bike again/what the hell am I even doing here” kind of bad; the kind where you find yourself questioning your life choices – hard – and where you wish you hadn’t ever swung a leg over that saddle. 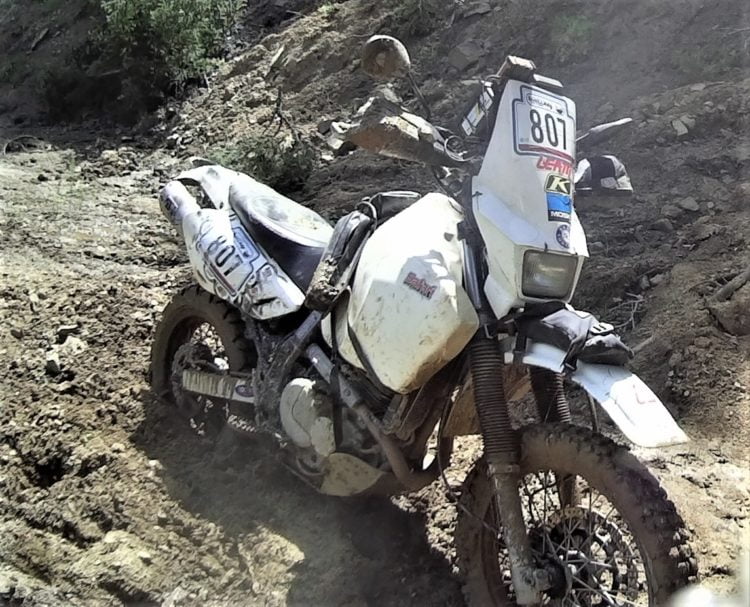 The answer to that is, yes, of course. I’ve been trapped in snowstorms in the high Andes in the dark, hypothermic and disoriented; got stuck in sandy holes in Southern Bolivia without much water supply; have given up altogether on a snowed-in mountain pass in Tierra del Fuego; have almost flown off a cliff on the TAT in Colorado; got hopelessly stuck axle-deep in mud during a rally race; survived dengue fever, twice; ended up in a ditch rubber side up with a long-lasting concussion; and much more. I’ve had my fair share of horrible weather and terrain days and weeks, burnt clutches, and tricky situations where nothing seemed certain anymore. I’m not being dramatic; it’s just part of life on the road, and it’s all good.

But it’s not really about the worst ADV moments that happen. Most of the time, it’s about how you react to them and what you choose to do afterwards. I remember a fellow rider telling me about that one time he had a flat and no idea how to fix it; he was somewhere in Central Asia and had to change the tire, but had no help and no clue. He did, in the end, change the tire, mostly by trial and error, using the few basic tools he had – but it took him nearly five hours. You could look at the situation and think, wow, being stuck somewhere in Central Asia with a flat you don’t know how to fix sounds horrible and hopeless. My friend, however, chose to look at it as a victory instead. “Yeah, it took me nearly five hours because I’d never changed a tire before, but I DID change it and for me, this was the best feeling ever even if I ended up riding in the dark, and in the morning, I saw that I actually put the tire the wrong direction on. None of that mattered, though. I did it, and it felt like a huge achievement”, he told me.

I had the exact same feeling that one time when I ran out of gas and willpower somewhere in Southern Patagonia and had to pitch my tent on the side of the road in a ditch; or that one time I ran out of money in Argentina; or that one time I barely made it because of severe hypothermia. Every bad situation, every mishap and misfortune, every accident and every flat tire is a lesson, not a punishment. And sure, I am very tempted to host a self-pity party every time something unfortunate happens (and every time there’s torrential rain and 400 miles to go still). But self-pity isn’t just ugly, it’s incredibly unproductive. All it does is create tunnel vision and cripple your ability to make choices and decisions. As does panic. Another friend of mine who is a professional wilderness guide and mountaineer once told me that the most important thing you need to do if you find yourself in a dangerous situation out in the wild is to calm down. If you broke a leg, got hopelessly lost, didn’t make it back before dark – whatever happens, the key is to sit down, breathe deeply, and calm down. “When you begin to panic you make very poor choices”, she said to me before adding, “my most vital item I carry with me on every hike or climbing expedition is a flask of tea. If I get into a potentially dangerous situation, that flask is my cue to sit down and have a sip so that I can calm myself breathe normally, and evaluate the situation with a calm, focused mind”.

This applies to adventure motorcycling and traveling just as much as it does to mountaineering. Bad things are going to happen if you’re going on a long-distance motorcycle trip. That’s guaranteed. Some of the “what ifs” you’re thinking about, along with some of the completely unexpected stuff, some silly stuff and some scary stuff – yes, all of it is going to happen. The question is, how are you going to react to them?

Because at the end of the day, you either win, or you learn.

What were your worst ADV moments?