Yamaha continues to tease its customers about future electric two-wheelers, with new battery bikes showing up in concept form.

Ahead of the Tokyo Motor Show, Yamaha is once again showing off its E01, E02 (supposedly new designs) and E-Vino electric scooters (pictured above). And, once again, details are light. The scooters exist,, at least in some form; the E-Vino has been highlighted on the show circuit for years, but Yamaha hasn’t said much about its range, recharge time, weight, cost, or potential North American market availability. It is expected to be roughly equivalent to a 50 cc step-through.

The Yamaha E01 is expected to have performance roughly equivalent to a 125 cc scooter. Photo: Yamaha

It seems likely we’ll see some sort of breakthrough soon with these machines, though, as Yamaha’s TY-E electric trials bike is showing up in various markets now, and Yamaha is certainly doing its part to move EV tech forward. It’s partnered with other manufacturers on electric motorcycle tech, first with Honda and then with the rest of the Big Four.

The ultimate goal the Japanese manufacturers claim to be working on, at least for commuting-type scooters, is universally swappable batteries. In other words, a removable battery that will work in a Kawasaki, Honda, Suzuki or Yamaha. If the Big Four developed machines around a common battery design, then riders could recharge their scooters by swapping out universal batteries at a central depot. Think of it like going to the gas station, but with a battery swap instead of a fill-up. 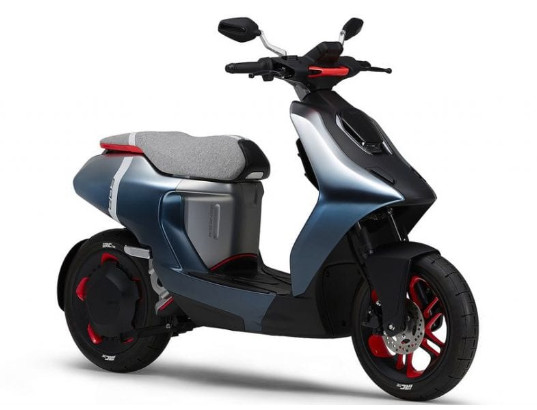