It seems that forced induction may be making a comeback of sorts.  Factory turbos made a short appearance in the motorcycle world back in the early 1980s.  The “big four”; Suzuki, Yamaha, Honda and Kawasaki all had factory turbocharged machines.  Bikes like the XN85, XJ 650T, CX 500/CX650 and GPZ 750 roamed the streets featuring forced induction.

But the reign of the turbo motorcycle was brief, and the various turbocharged models died out.  The bikes suffered from an assortment of ailments including turbo lag, excess weight and, flexible frames that made riding less enjoyable. 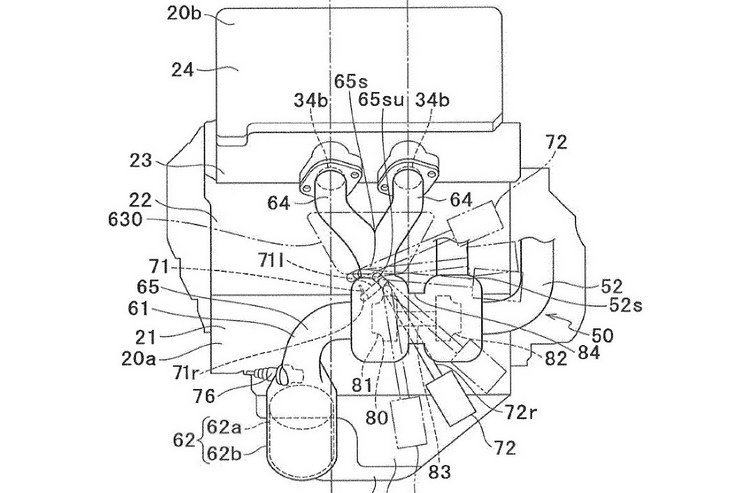 One of the drawings in Yamaha’s turbocharged engine patent application.

However, it seems that some manufacturers are re-examing turbochargers for motorcycle use.  Suzuki has been making patent applications for years for a machine they have called the Recursion.  More recently, rumors have been circulating that Suzuki will re-introduce the Hayabusa with a turbocharger.

But now it appears that another manufacturer is looking at turbocharging a motorcycle.  Yamaha has filed a new patent application for a turbocharged parallel twin engine.

The patent drawing shows what looks like a Yamaha MT series engine fitted with a turbocharger.  Whether Yamaha will ever put it in a motorcycle isn’t known.  But with at least two of the “big four” motorcycle manufacturers filing patent applications, it looks like they have more than a passing interest in bringing turbochargers back.

It could be that the upcoming new Euro5 emissions regulations have something to do with the renewed interest in turbocharging.   Technology has come in a long way since the early 1980s; it would be interesting to see what “modern day” motorcycles could do with forced induction.