Yamaha appears to be adding another leaning three-wheeler to its lineup soon, with design drawings for the 3CT scooter appearing in Europe.

The 3CT originally appeared as a concept bike (concept trike?) on last year’s show circuit. It’s a step-through, but carries a similar front end to the Niken leaning three-wheeled motorcycle. There was considerable conjecture that Yamaha was working on an leaning three-wheeler using the same engine as the R3, but instead it appears to use the same liquid-cooled 292 cc single cylinder engine as the XMAX 300 megascooter. That scoot isn’t available in North America, but at least it’s a proven powerplant in other regions that don’t have silly aversions towards step-throughs.

The XMAX 300 makes about 27 hp, so while this wouldn’t be a high-speed sport tourer like the Niken, it should nonetheless handle most traffic situations without difficulty.

These drawings were filed with the European Intellectual Property Office, to protect the production machine’s visual design. Motorcycle.com used its network of well-placed intelligence operatives to uncover the drawings. The scooter in the drawings looks more or less like the 3CT prototype, but it will probably wear a different name when it actually makes it to market.

Reaction has been mixed to Yamaha’s push towards this market, with many riders poo-pooing the leaning design, but experienced motojournalists have sent back positive reviews after test rides, in many cases. As always, the marketplace will be the ultimate judge of the success of the leaning three-wheeler. 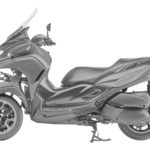 Kind of an awkward-looking front end, but it might not be so gawkish in person? 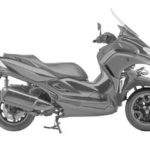 Basically the same machine as seen at EICMA.

Piaggio might have been first to market, but Yamaha is taking over the leaning three-wheeler game.

If the design is the same as the Niken, the scooter won’t self-balance at stops. 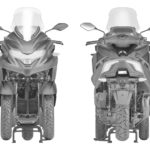 The view from the the front and back. 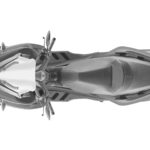 Not the roomiest passenger accommodations, but it should do the trick.