We had to wait a while, but through the good graces of Yamaha, we have been able to have a day-long test ride of their new 2021 Ténéré 700.  We spent most of the day riding bits of twisty pavement (40%) and pounding dirt roads and trails (60%) in Georgia’s mountains.  And it was terrific.

The day’s riding would involve only me and two Yamaha reps; Marcus and Noah.  We’d have the full day to experience the Ténéré 700 on various terrain without the hassle of a large group ride.  Nice.

We got a reasonably early start since it was going to be a hot and muggy day.  Temps were to be in the 90s (+33C), and the forecast ultimately proved correct. 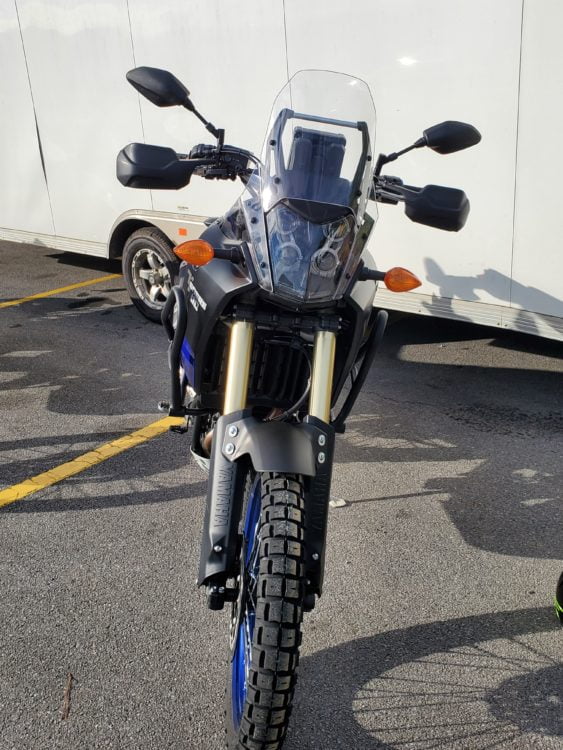 Rally bike styling is evident on the Tenere 700.

We met in a parking lot and fired up the bikes.  The Ténéré’s 689cc liquid-cooled, parallel-twin, cross-plane engine started immediately with a nice “rorty” engine note.  Not too loud, not too soft, and with a distinct and pleasant growl.  The engine feels quite smooth at start-up, and as the day wore on, it remained that way.

Minutes after we left the parking lot, we were on some fast, curvy dirt roads to get a feel of the machine off the pavement.  At the time, the bike was set up with street settings, and the ride was quite plush.  The dirt road’s small bumps were dealt with efficiently, and the ride was still quite smooth.  Even over some of the harsher dirt road sections, both ends of the bike remained firmly planted to the earth, and feedback through the bars was quite good.   At higher dirt road speeds, the soft setting affected the bike’s composure somewhat.  Still, the ride remained composed with no drama.  It was an excellent beginning to my day-long ride on the Ténéré 700.

While not a powerhouse at about 75hp, the engine is quite torquey and easy to manage.  You don’t have to decidedly spin the engine to make power; there’s plenty of grunt down low.  And even when you do spin the engine, it remains quite smooth.

With the fun pavement dispatched, we decided to hit some ORV trails.  It was easy to adjust the fork and shock for a more suitable compression and rebound damping using a flat blade screwdriver.  It took no more than a couple of minutes. 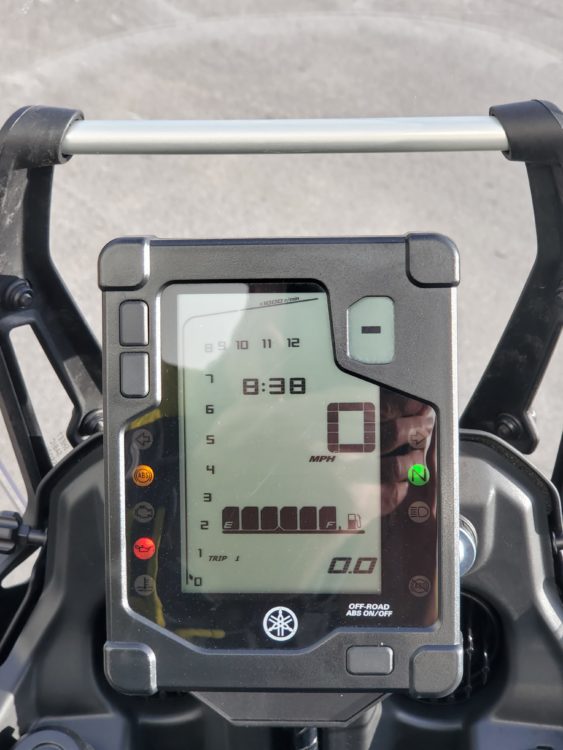 A small LCD display provides all the info you’ll need. That rubber button in its right-hand corner lets you turn off or on the ABS.

As we prepared to go, I pushed the large button at the corner of the bike’s display, and it quickly turned off the ABS.  The Ténéré doesn’t have traction control or other such electronic gadgets.  So you know that if you have a problem, it’s you, not the machine.  That’s oddly refreshing.

With the suspension firmed up, the ride was not as compliant, but it was far better for the rocks and bumps ahead.  The Ténéré’s riding triangle made it easy for me to get into and maintain an aggressive riding position.   I was able to quickly get my weight to the front when required. That said, I’m 5’9″ with a 30-inch inseam.

Our second trail ride was on the Rocky Flats ORV trail.  It, too, is in dense forest, but is more technical and features fist-sized loose rock and loose tree branches, bigger water bars, and more sandy soil.  Again, the Ténéré handled the conditions well.  In fact, it didn’t feel like a bike weighing 450 pounds wet.  It felt like a much smaller machine.  If you’re on less than enduro type terrain, the Ténéré can handle it.

That’s not to say that you should plan to be leaping from rock to tree stump on this bike.  It’s not an enduro machine, nor is it designed to be one.  For the riding conditions you’re likely to find on trails like the Backcountry Discovery Routes, the Trans America Trail, and the Continental Divide Route, the Ténéré is up to the task. 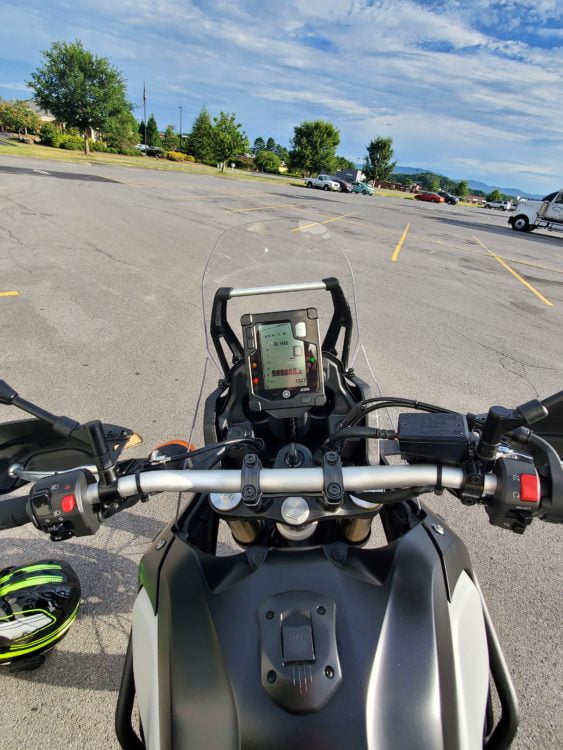 The view from the cockpit of the Tenere 700.

And you’ll ride them in comfort.  The Ténéré’s smooth and torquey powerplant is easy to manage and powerful enough to take you and your gear on long journies.  If you are so inclined, Yamaha has an extensive line of factory accessories for both on and off-road use.

I did have one problem near the end of the Rocky Flats Trail.  We were moving right along through some loose rock.  I could hear the rocks bouncing off the bash plate as I rode along.  But that’s where the problem arose.  One of those rocks scored a direct hit on the sidestand switch causing it to fail and the bike stutter to a stop.

Unfortunately, the stock bash plate does not cover the switch, and it is vulnerable to hits from rocks or whatever.  Luckily, it’s an easy trailside fix to cut the wires from the switch and splice them together.  I was riding again in less than 5 minutes.  But the moral to this story is to get yourself a bigger bash plate if you intend to ride off-road extensively.

The fact that the stock bash plate didn’t protect the sidestand switch at first ticked me off.  But after thinking about the Ténéré’s $9,999 base price, purchasing a bigger bash plate doesn’t seem to be that big a deal.

We’ll have a full in-depth review of the Ténéré 700 in the not so distant future.  Yamaha is loaning us the Ténéré 700 for a month.  I’ll be riding it on the pavement and dirt of Vermont to get a feel what it is like to live with from “day to day,” and I’ll get deeper into the machine itself.

So to cap off my first impressions, I’d say that the Ténéré is a capable and easy to ride machine.  It will take you just about anywhere that any “adventure” bike will take you and make the travel easy and pleasant.