You don’t often think about motorcycles and motorcyclists helping to record history.  Or at least I didn’t.  But I recently found a story about how motorcycles helped record the history of Yellowstone National Park.  It turns out that two men and Harley-Davidson played a significant role in recording some of Yellowstone’s history.

Rick DeVore, son of Harley rider Don DeVore relayed the story.  In 1929, Rick’s father Don had taken in interest in motorcycles.  At the time he was 18. Ultimately Don got a job at Montana Cycle and Supply, an early Billings, Montana motorcycle and bicycle shop.

Motorcycles were seen as a fad at that time and really were still in their infancy.  But Don DeVore wanted in.  He became a Harley enthusiast and was particularly interested in how they operated.  Little did he know that he would become a part of Yellowstone history.

The motorcycle’s role in maintaining Yellowstone history started sometime in 1929; before the stock market crashed.  A man named Jack Haynes walked into Montana Cycle and Supply with an interesting request. 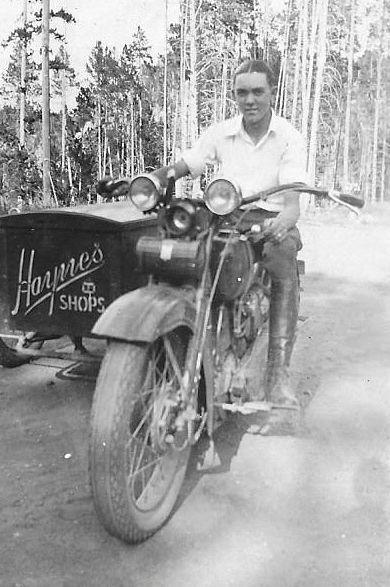 A young Don DeVore sits on one of the 5 Haynes’ Harleys which he helped assemble. Photo credit: Don Devore

Before I tell you about the request, you first need to know a little history of the Haynes family.  The man who walked into Montana Cycle and Supply with the unusual request was Jack Haynes.  He was the son of a well known Yellowstone photographer, F. Jay Haynes.  F Jay Haynes was a well-known and first photographed Yellowstone in 1881 to publicize the Northern Pacific Railroad.  F. Jay Haynes photography was highly regarded and he became the de facto official photographer of Yellowstone.  But when F. Jay Haynes retired, his son Jack took over the business.

These shops sold postcards and also did photo processing.  The thousands of amateur and professional photographers who visited Yellowstone wanted their photographs developed quickly.  Haynes latched onto this demand and soon found he needed a way to transport undeveloped film to his photo processing center.

Of the Harley-Davidson models of the time, two could be ordered with sidecars. Courtesy image.

It’s not clear what model he ordered, but at the time, Harley was producing the JDH.  Called the “motorcycle that made the 1920s roar”, the bike was said to be able to go 85 MPH and got excellent mileage.

The JDH was equipped with a 74 cubic inch V-twin engine and sold for about $400.  $400 was not an insignificant amount.  In today’s dollars, each bike would have cost about $6,000 and Haynes had just ordered 5 bikes.

Haynes’ idea was to have the olive drab painted motorcycles equipped with sidecars.  The rigs would be used to pick up the unprocessed film and raced to the processing lab where the film could be processed and printed overnight.

The following morning, riders would carry the printed photos back to all of the Haynes photography shops so people could have their phots the next day.  Jack Haynes was way ahead of his time and was likely the first overnight photo processor in the country. 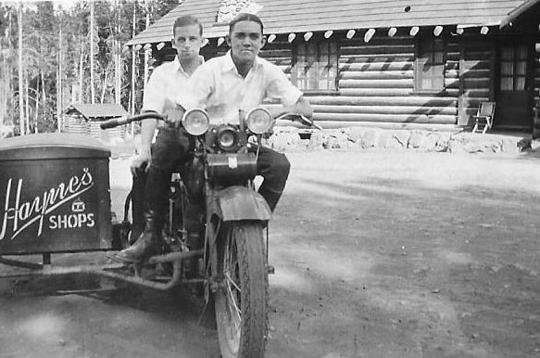 Haynes’ riders would pick up the unprocessed film and take it to the processing center in the park. Riders would spend the night and ride back to various stores the morning with the printed photos. Photo Credit: Don DeVore

The motorcycles arrived unassembled and in crates.  Now, Haynes needed someone to assemble the bikes and train riders how to ride the newly purchased machines.

This is where Don DeVore came in.  Haynes hired DeVore on the spot and DeVore traveled to Yellowstone with Haynes to assemble the bikes and train their new riders.  Ultimately, DeVore ended up staying in Yellowstone for the entire summer.

In those days, Yellowstone’s roads were rough and could be in very poor condition.  DeVore wasn’t worried about them.  But he did relate those early morning riders would sometimes round a corner only to find bears sleeping on the road’s warmer asphalt.  After that summer, DeVore lost a cousin in a motorcycle crash and gave up motorcycles.  But through his efforts, Haynes got his motorcycles and his riders trained.

Unfortunately for Haynes, not long after the purchase, the Great Depression hit and tourism dropped dramatically.  In 1929 more than 260,000 people visited Yellowstone.  But by 1931 attendance had dropped to 157,000.

Concessioners took large losses for three straight years.  In 1932, business lost from 50 to 60 percent of their revenue.

But Haynes was not to be stopped.  Working with the park’s administration, Haynes was able to convince them that he should be “the sole provider of pictures, postal cards, film, Kodaks and guide books.  Although Haynes’ businesses took a hit, they managed to stay in business until 1967 well after his death.

A postcard shows one of the larger Haynes Photo Shops in Yellowstone circa 1934. Photo credit: National Park Service

Without Don DeVore and Jack Haynes’  efforts, some of Yellowstone National Park’s history could have been lost.  If you’d like more info,  the official Yellowstone website and Yellowstone.org have more on Haynes and DeVore.