Paul Daimler and I have something in common. We both hated the training wheels attached to his father Gottlieb’s Einspur or Reitwagen, the world’s first motorcycle. Well, in my case it wasn’t the one built by Gottlieb in 1885; that was consumed by a factory fire. The one I rode was a replica, built by Phil Mumenthaler from Kununurra in Western Australia. But I hated the training wheels as much as Paul did when he rode the original on the 10th of November, 1885. 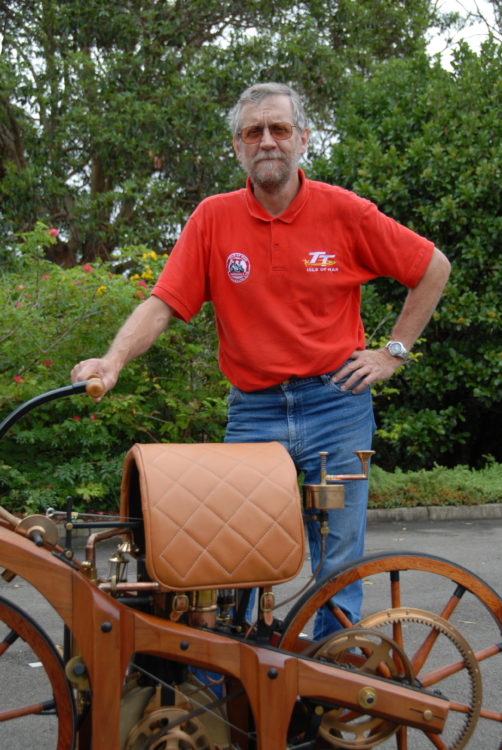 The ‘Australian Daimler’ with its proud father, Phil Mumenthaler.

More on the ride later. For now, here’s Phil, explaining how he built this beautiful piece of engineering. He began the project in 2007 and it has absorbed a thousand hours and some $30,000. “I think people should see this bike”, he says, “not locked away in somebody’s private collection. I would be happy to have it displayed in museums so people can appreciate just how it all started… I plan to… rotate it around [Australian] museums.

“The engine was made by Murray Ferrell, who used to live in Kununurra, and his off-sider Phil McLean. The trick was to be able to house everything inside the engine shroud as on the original. A friend in Germany measured one of the [Daimler Benz factory] replicas and we went by these dimensions, wheelbase, crankcases, engine height. They used to call this motor the grandfather clock because it is so tall – nearly two feet high – and very advanced for its time. It had fan cooling and a fully-enclosed crankshaft when most engines had open crankshafts… 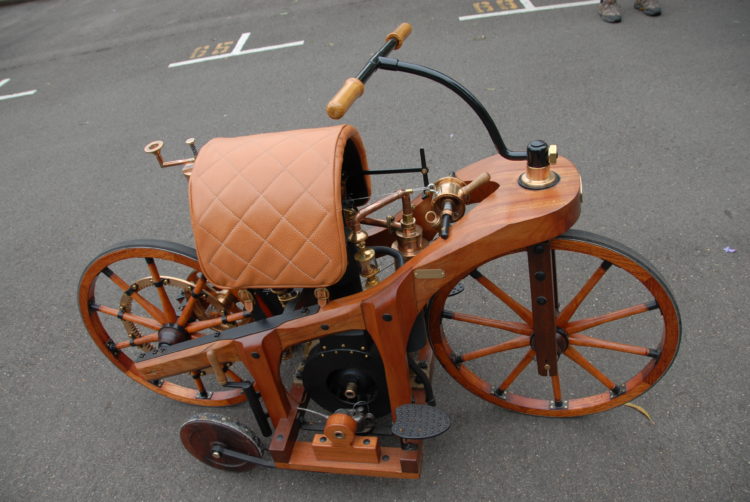 If that’s not a thing of beauty, I don’t know what is.

The original motor had what they called glow-tube ignition. This was a flame under a platinum tube that was on all the time while the engine was running. The tube had to be heated to cherry red and would go through some sort of asbestos gland into the barrel. To adjust the timing you pushed the tube in and out – if it sticks in further the engine will fire earlier because more hot tube is exposed to the mixture. Pull it out and you retard the ignition. The surface carburettor takes a heated mist mixture – it depended on how many cobblestones you hit as to how rich the mixture was! The carb had no jets – just fumes basically.”

Modestly, Phil says “I did all the little bits.” The timber he used for the chassis is Indonesian Batu. Tasmanian oak and hickory make up the wheels, which have Jarrah hubs. 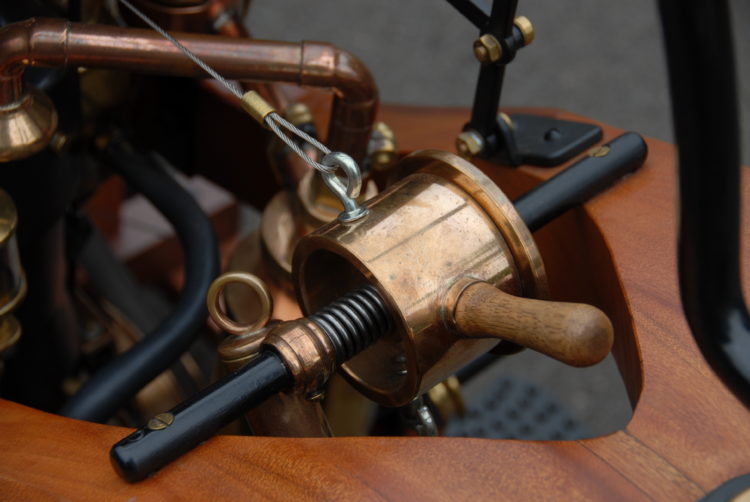 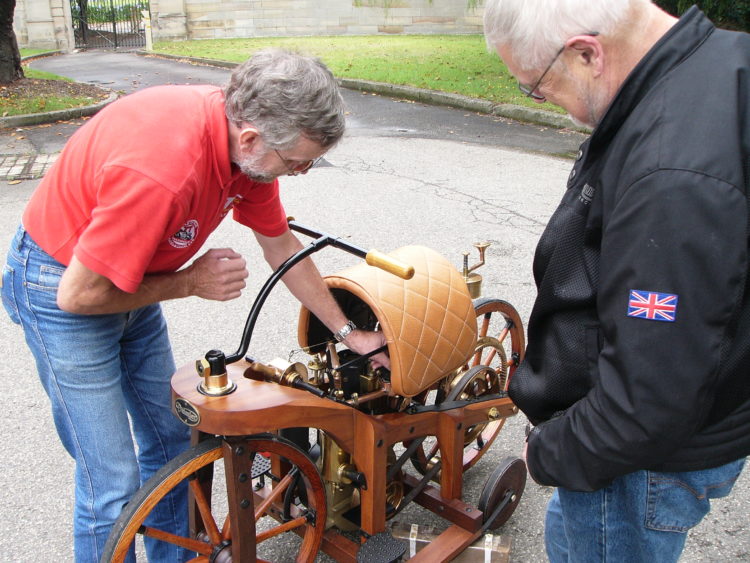 Phil gets ready to fire ‘er up. It takes an electric drill!

“The crankcases are machined from solid steel, then bronze coated. This is done by pre-heating the cases to 300 degrees and spraying on a primer, then the bronze is sprayed with an air/acetylene mixture. The bronze barrel screws into the crankcase and then the bronze head screws into the top of the barrel, as on the original. We used a modified crankshaft from a Howard Rotivator. The original engine used a face cam on the crankshaft but we modified a cam from a Sundial farm engine. There was so little to go on, no photographs or drawings. It (the Einspur) was built only as an experimental machine, not to be sold to the public, and that’s why there is so little information. Unfortunately Daimler died about the same time as the factory fire that destroyed the bike, so nobody could ask him how it was done – the bike effectively died with him.

“Our engine is externally very similar to the original, and is much easier to start and to actually ride. We used a Honda CBX piston and valves, so with a bore of 64.5 mm and a 100 mm stroke that makes 312cc instead of the 264cc original. We use modified electronic ignition with an American Tecumsi carburettor, and we have proper bearings throughout – wheel bearing and steering head – instead of plain bushes. [The builder of the factory replicas] tested every one he built outside his house, and found that they wouldn’t even go up a very slight incline that would be no problem to even a push bike. But the extra performance in this one means it can cope quite OK. It’s also a major effort to get these replicas started, but mine is quite easy. It ran pretty much straight away. You tend to give it too much fuel, but it likes very little.” 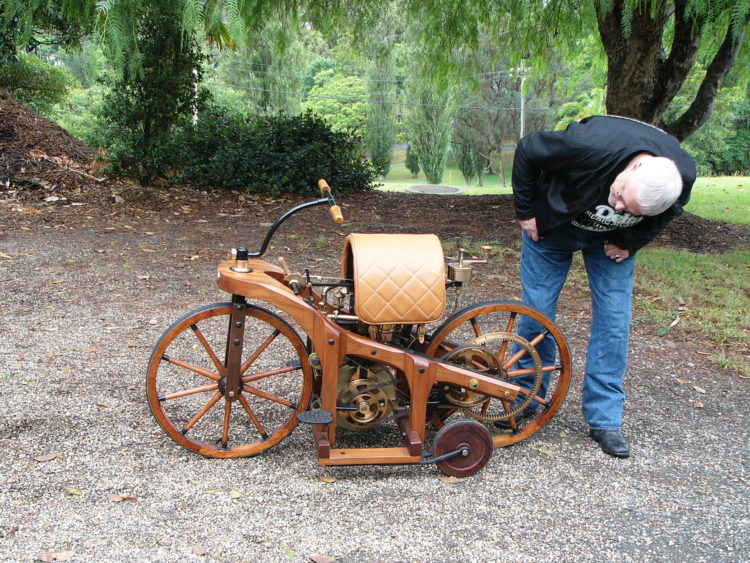 “Hmm, so where does the ignition key go again?”

So how’s she go? After using his portable electric drill to spin up the engine and getting it firing, Phil remarked reassuringly, “You’re only the third person to ride it.” He didn’t have to say “don’t crash it”.

Climbing aboard is a bit like mounting an MX bike. The seat is high and feels even higher because there is so little of anything around you. The throttle is a lever between your legs. I gave it a bit of gas and the Einspur started rolling. We were on a pretty smooth surface in a car park, but without pneumatic tyres or any suspension it was a bumpy ride. I nevertheless got a little bit of speed up – throttle control is pretty easy, but touchy – and then the training wheels started doing their thing. 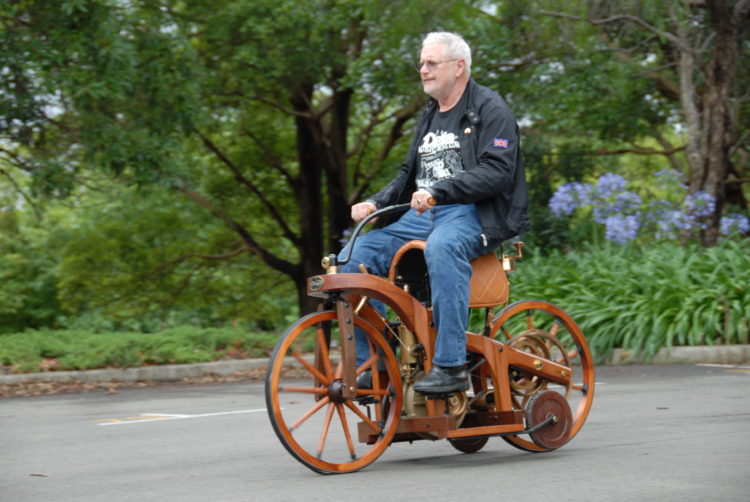 Brave or crazy? Riding the Einspur is an experience I’ll never forget.

Whenever the Einspur got off the vertical even a little, a wheel would touch down and drag the bike off to the side. Correct, and the opposite wheel would do the same thing. Correct again, and… but you get the idea, I’m sure. I was in a cold sweat by the time I’d reached the end of the car park. The trouble is not only the effect of the training wheels, but the height of the thing which made it seem that I was going to topple over at any moment.

After a few more runs I got the procedure down much better, but even so I could only look on admiringly while Phil did a couple of lengths.

I can’t remember ever having felt so privileged in all my years of motorcycling.