Zero Motorcycles is teasing a new model to be called the SR/S.  And, we don’t know much about it.  In a recently released email, the US electric motorcycle manufacturer provided just a single picture of the machine.

The image shows the motorcycle crossing a nearly empty bridge at night.  Across the picture in bold letting is SR/S 2.24.20.  That means that in the not too distant future, Zero will unveil the new machine. 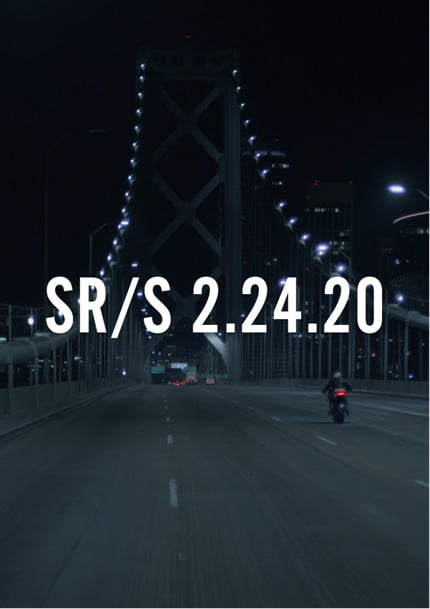 This picture is the sole evidence of the new Zero SR/S.

There’s not a lot of information about the bike, but there is quite a bit of online buzz about what it could be.  Most suggest that the new model will be a fully-faired version of the Zero SR/F.

In making this claim, Electrek posted a video it says one of their readers found buried in Zero’s public site.  There’s a lot of smoke and very little visibility except a very brief outline of the bike and its reptile-like eye headlights.

What’s in a name

So what else can we surmise?  If we examine the bike’s name, we can make a couple of educated guesses about the bike.  The “S” would seem to indicate the bike is a street model.  Given that the teaser shows the bike in an “urban” environment, a street machine seems plausible.

Since the new machine also carries the “SR” moniker, one could easily suggest that the new machine is a variant of the existing Zero SR/F.  A fairing wrap on the SR/F would seem to be an “easy” way to launch a new model without making a huge investment.

Another indicator that the SR/S could be a fully faired model is the effect a fairing has on aerodynamic drag and range.

All in all, the development of a fairing to reduce aerodynamic drag seems like a pretty “easy” fix for a big electric motorcycle problem.  How much more range would a fairing add?  Only Zero knows at the moment.  But if it is significant, it would be easy for them to tout the machine’s increased range without having to have invested in electronic fixes.

Whatever the SR/S is, we won’t have to wait long for the definitive answer.

Man Breaks Into Burning Building To Save… Motorcycles